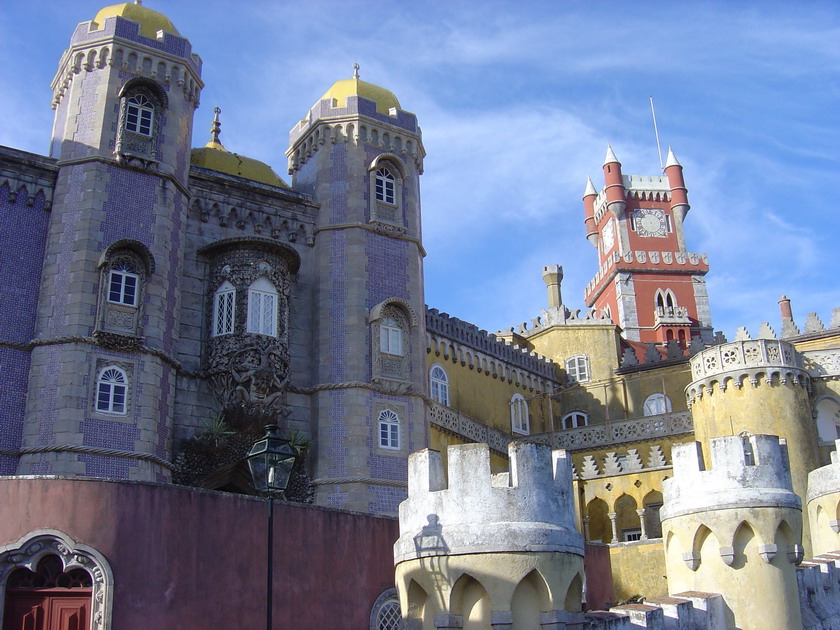 The Pena National Palace (Portuguese: Palácio Nacional da Pena) is a Romanticist palace in São Pedro de Penaferrim, municipality of Sintra, Portugal. The palace stands on the top of a hill above the town of Sintra, and on a clear day it can be easily seen from Lisbon and much of its metropolitan area. It is a national monument and constitutes one of the major expressions of 19th century Romanticism in the world. The palace is a UNESCO World Heritage Site and one of the Seven Wonders of Portugal. It is also used for state occasions by the President of the Portuguese Republic and other government officials.

The palace's history started in the Middle Ages when a chapel dedicated to Our Lady of Pena was built on the top of the hill above Sintra. According to tradition, the construction occurred after an apparition of the Virgin Mary. In 1493, King John II, accompanied by his wife Queen Leonor, made a pilgrimage to the site to fulfill a vow. His successor, King Manuel I, was also very fond of this sanctuary, and ordered the construction there of a monastery which was donated to the Order of Saint Jerome. For centuries Pena was a small, quiet place for meditation, housing a maximum of eighteen monks. In the 18th century the monastery was severely damaged by lightning. However, it was the Great Lisbon Earthquake of 1755, occurring shortly afterwards, that took the heaviest toll on the monastery, reducing it to ruins. Nonetheless, the chapel (and its magnificent works of marble and alabaster attributed to Nicolau Chanterene) escaped without significant damage. The palace quickly drew visitors and became one of Portugal's most visited monuments. Over time the colors of the red and yellow façades faded, and for many years the palace was visually identified as being entirely gray. By the end of the 20th century the palace was repainted and the original colors restored, much to the dismay of many Portuguese who were not aware that the palace had once displayed such chromatic variety. In 1995, the palace and the rest of the Cultural Landscape of Sintra were classified as a World Heritage Site by UNESCO. Almost the entire palace stands on rock. Structurally, it can be divided in four sections: a) the foundations and its enveloping walls, with two gateways (one of which is protected by a drawbridge); b) the restored structure of the old convent, and the clock tower; c) the Arches Yard in front of the chapel, with its wall of Moorish arches; d) the palatial zone and its cylindric bastion, with interiors decorated in the cathédrale style. As many elements as possible were preserved of the remains of the Hieronymite convent including the cloister, the dining room, the sacristy, and the Manueline-Renaissance chapel. All were embedded in a new section that featured a wide terrace and a clock tower. The Queen's Terrace is perhaps the best spot for obtaining an overall picture of the architecture of the palace. The terrace features a sundial and a cannon. An automatic mechanism actuated by the sundial used to cause the cannon to be fired every day at noon. The clock tower was completed in 1843. The interiors of the Pena Palace were adapted to serve as the Summer residence of the royal family. It has amazing stuccos, painted walls in trompe-l'oeil and various revetments in tile from the 19th century, forming part of the numerous royal collections. The Pena Park is a vast forested area completely surrounding the Pena Palace, spreading for over 200 hectares of uneven terrain. The park was created at the same time as the palace by King Ferdinand II, who was assisted in the task by the Baron von Eschwege and the Baron von Kessler. The exotic taste of the Romanticism was applied to the park as it was to the palace. The king ordered trees from diverse, distant lands to be planted there. Those included North American Sequoia, Lawson's Cypress, Magnolia and Western Redcedar, Chinese Ginkgo, Japanese Cryptomeria, and a wide variety of ferns and tree ferns from Australia and New Zealand, concentrated in the Queen's Fern Garden (Feteira da Rainha). The park has a labyrinthic system of paths and narrow roads, connecting the palace to the many points of interest throughout the park, as well as to its two gated exits.

Pena National Palace is added to the following trips: