The Terracotta Army or the Terra Cotta Warriors and Horses, is a collection of terracotta sculptures depicting the armies of Qin Shi Huang, the first Emperor of China. It is a form of funerary art buried with the emperor in 210–209 BC and whose purpose was to protect the emperor in his afterlife.

The Cliff Palace is the largest cliff dwelling in North America. The structure built by the Ancient Pueblo Peoples is located in Mesa Verde National Park in their former homeland region. The cliff dwelling and park are in the southwestern corner of Colorado, in the Southwestern United States. Tree ring dating indicates that construction and refurbishing of Cliff Palace was continuous from c. 1190 CE through c. 1260 CE, although the major portion of the building was done within a twenty-year time span. 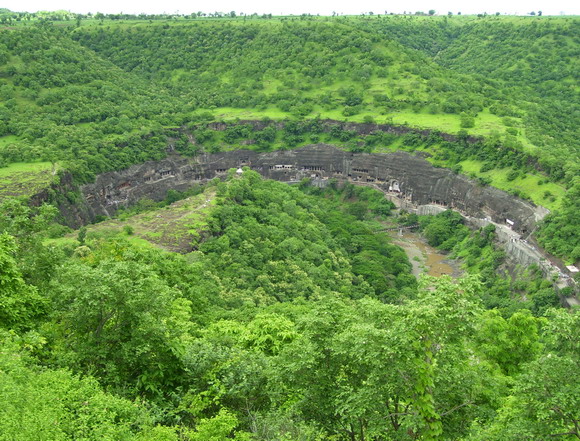 The Ajanta Caves in Aurangabad district of Maharashtra, India are about 30 rock-cut Buddhist cave monuments which date from the 2nd century BCE to about 480 or 650 CE. The caves include paintings and sculptures described by the government Archaeological Survey of India as the finest surviving examples of Indian art, particularly painting, which are masterpieces of Buddhist religious art, with figures of the Buddha and depictions of the Jataka tales.

The Etar Architectural-Ethnographic Complex (usually referred to as Etara) is an open-air museum and a neighbourhood of Gabrovo (8 km south of its center) in northern Bulgaria. It is located on the northern edge of the Bulgarka Nature Park, between the park and the city of Gabrovo. It presents the Bulgarian customs, culture and craftsmanship.

Saksaywaman is a walled complex on the northern outskirts of the city of Cusco, Peru, the former capital of the Inca Empire. The complex is as many other Inca constructions made of large polished dry stone walls, each boulder carefully cut to fit together tightly without mortar. The site, at an altitude of 3701 m, was added as part of the city of Cusco to the UNESCO World Heritage List in 1983. Located on a steep hill that overlooks the city, it contains an impressive view of the valley to the southeast.

Bolivia holds about 43% of the world's lithium reserves; most of those are located in the Salar de Uyuni.

"The wilderness holds answers to questions man has not yet learned to ask."